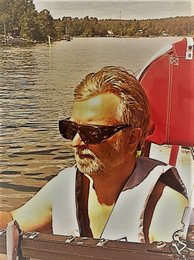 Having grown up in the North of Germany, Schleswig-Holstein, I studied biology and after that worked for 25 years in the pharmaceutical industry which led me to live in several European countries, e.g. Budapest / Hungary and Brighton / UK.

Today, I live together with my family in Stockholm, Sweden, our home of choice since many years back. I run my own company as a management consultant.

Already for ages I have been a great fan of crime stories and I read many of the Swedish crime series. Therefore, I had the desire to write my own crime story with my characters acting in Sweden. Already for a while I had a first idea for the plot, but first in 2015 I got the opportunity to take the time in order to make it come true. The result is  my first book: "Vanished?", the start of the Stockholm Sleuth Series.

You will receive the free e-book "The Arrest", the prequel to the series.

The fourth book of the series, "GUILTY?" is now published.

June 2019
Now the audiobook of "SECRETS?" is available.

Now the prequel to the series is available - a short story about a case during Lars' police service. This e-book is exclusive for my prescribers.

The audiobook of "VANISHED?" is available at many distributors. Narrated with distinct voices and sound effects.

The third book of the series, "MURDER?" is now published on Amazon.

I want to thank all my readers who gave me feed-back on my first novel "Vanished?".

They all said they liked the book very much but many were not happy with the English translation. Therefore, I had the whole text edited and partially retranslated by Doreen Zeitvogel who also translated my second book "Secrets?".

The result is a second edition which I am confident will meet the expectations of  all English readers - available now on Amazon.

The sequel to "VANISHED?" is now available  in English on Amazon:  "SECRETS?"

I have started to write the third book in the series: "MURDER?" .

We meet again with Liv and Martin who provide a new case to Elin and Lars.

My second book can be ordered at  Amazon (in German): "GEHEIMNISSE?" - a novella with focus on Elin.

The English version of my book is now published: "VANISHED?" is available on Amazon.

My first book was published in German language with the title: "Verschwunden?"